Casa Lucas was founded by Lucas Piñeiro. His death is dated un 1780 according to documents that have been preserved in the house. Casa Lucas was passed from father to son and served as a family home until 1998. At that moment José Antonio and Marisol decided to restored it and convert it into a cozy country hotel which we hope you come to visit. 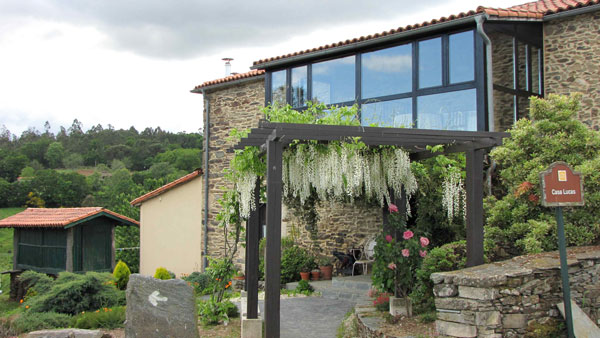 Casa Lucas is sorrounded by a large area that streches down to the shore of Portodemouros reservoir. The house is located in Lugar da Igrexa which belongs to Viñós parrish. Lugar da Igrexa can be translated to ‘place of the church’. It is here where the old village church is located.

Viñós has a temperature climate which allows for the production of all kinds of agricultural products such as cereals, fruits and vegetables. It boasts several greenhouse farms whose high quality products are used to cook Casa Lucas’ main dishes.

But greenhouse farms are not the only village activity. In fact, Arzúa is well know for its cheese, which is marketed under the label: Arzúa-Ulloa cheese. There are also several cattle farms in the area.

Portodemouros reservoir was built in 1968. It suffuse territory in Arzúa, Vila de Cruces and Agolada. Its capacity is 197hm² with a maximum of 252hm² and a minimum of 220hm².

The reservoir has a special fisheries regime. It is an ideal spot for practising nautical sports, hiking or cycling. In the nearby rivers in the Portodemouros area, there are natural spaces such as recreational areas or river beaches where you can enjoy a picnic. We recommend Furelos river beach in Melide which has a large park. We can also suggest visiting the national areas of A Carixa,
Remesquide and Gres, which are located in Vila de Cruces, and the recreational area of O Liño, in Santiso.

There is a small ferry since 1977 which comunicates Santiso with Vila de Cruces through Portodemouros. It is a free service which is open everyday of the year. It carries cars and passengers.

There is also a beautiful hiking route which runs through the Arzúa’s area from north to south. It links the council of Touro at its start, with the French route of the Way of Saint James in the middle and with the north route of the ‘Camino’ at the end. This route is called the ‘Portodemouros Reservoir Route’ because it passes close to the hydroelectric plant and sorroundes the reservoir for more tham 5km. The route can be divided in two different paths:

Viñós is located to the south of Arzúa. This small town is one of the most important cattle regions in Galicia. Arzúa’s cheese enjoy great national and international prestige. It is also located on the pilgrimage route of the Way of Saint James. There are several jacobite links still preserved in Arzúa: Rúa do Camiño street, an old piligrim hospital, a church dedicated to Santiago and its clock where you can spot Camino allusions on its ornamentation.

Arzúa is located in the southwest of the province of A Coruña. Its neigbouring councils are O Pino, Frades, Boimorto, Melide, Santiso, Vila de Cruces and Touro. It is a the perfect place for pastures and our cows produce quality milk which is made into the area’s most well known product: Arzua cheese. Why not take advantage of finding yourself in the best Galician territory for cheese?

Arzúa’s council also has an interesting artistic and historical heritage. There are many archaeological remains, among others, mámoas (burial mounds). We can also find “Castreña” culture archaeological remains such as, for example, Castro Curbín or Roman remains such as the XIX Route and the Ribadiso bridge. It is in Middle Ages when the figure of the Apostle St. James appears as do the Jacobean pilgrimages. New villages spring up, among them we can highlight ‘Vila Nova’, which is the ancient name for Arzúa, as we discover reading the Codex Clixtinus. The village originates with the Ribadiso da Ponte Hospital, which assists pilgrims, and the Madanela convent.

Arzua celebrates the Cheese Festival the first weekend in March. You can not only try our famous cheese but also participate in numerous activities. Come and visit a region with plenty to offer!